Thomas was Post Master in Coddenham in October 1870. He signed as a witness on a document between William David Dallaston and David James Miller. His young daughter Emma , aged 16, was his assistant.

George appears in the 1881 Census as a widower aged 57. He was Postmaster and Parish Clerk and born at Hemingstone. In 1877 he was Post Master and letter carrier in Needham Market. His daughters Laura and Janet both worked in the post office. It was a Postal Telegraph Office and a Bank and next door to the village shop. He was still the Post Master in the 1891 Census, but he died in the same year on the 10 September 1891. His gravestone is not far from the Church porch.

From “Memories of Coddenham” by Edith Martin. “…Contact with the outer world was maintained by the Post Master Mr George Lee, who was also Sexton. He walked daily to Needham with the letters, returning with the Coddenham post…” 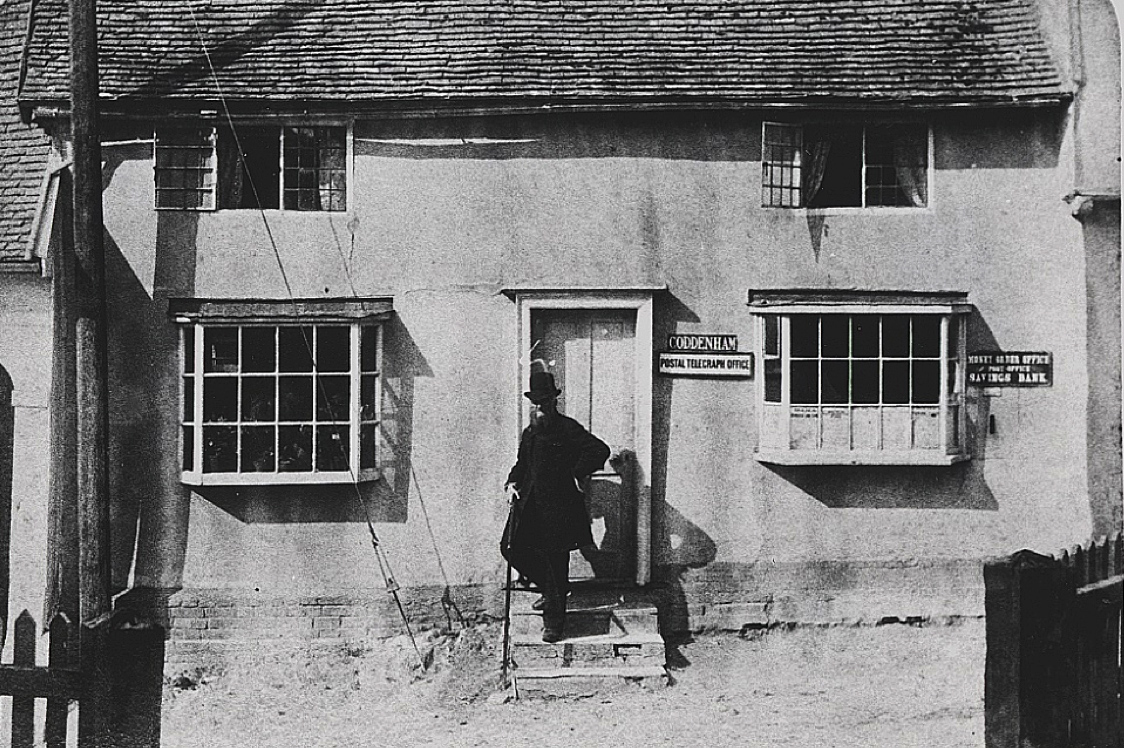 In 1892 Mr S B Twiddy who owned the adjacent shop (Gudgin’s) demolished the row of old houses of which this formed part and erected the present red brick houses in their place. The Post Office was re-established in the new house built on the side of the former Post Office. 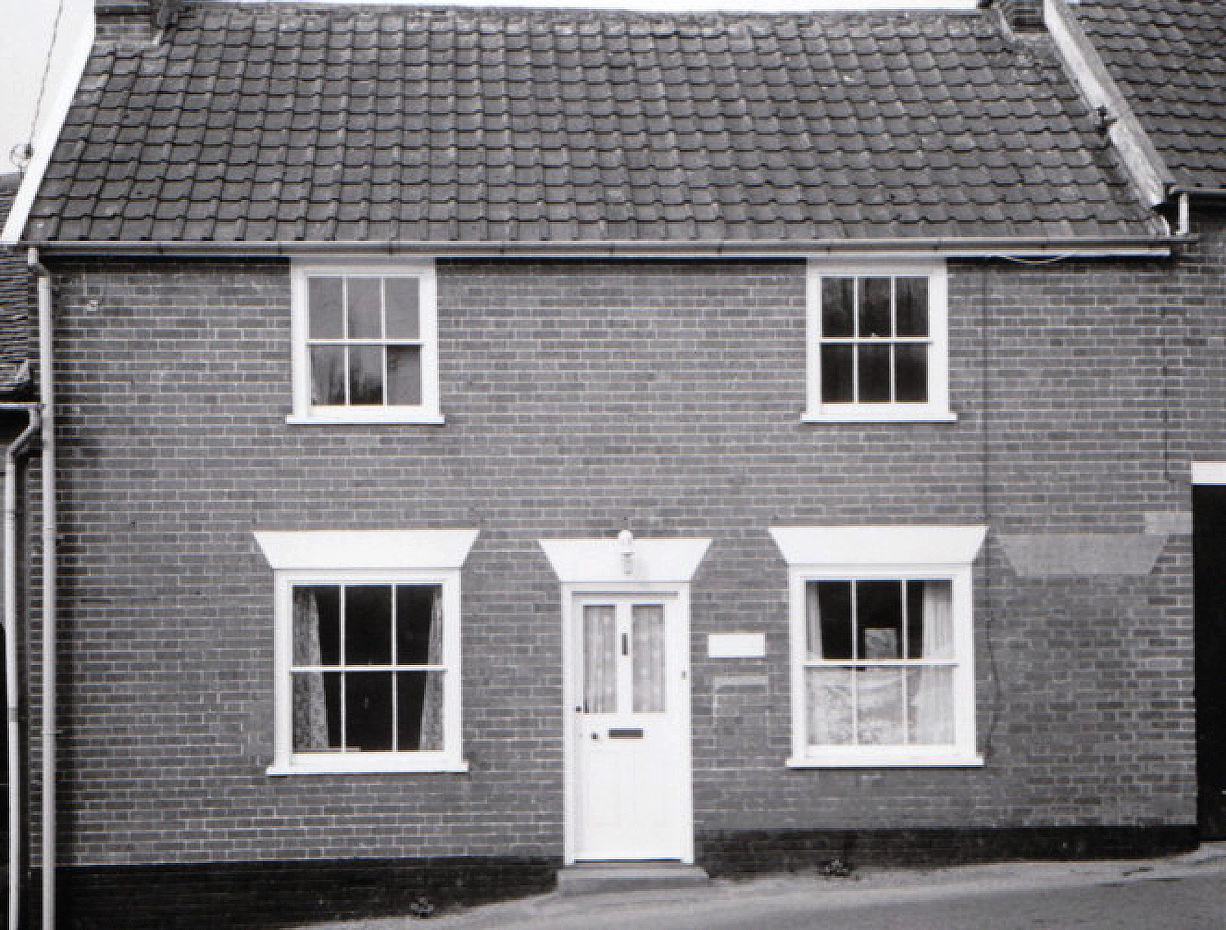 Photo: The place where the letter box used to be can be seen in the wall of the house which became the Police Station

In the 1901 Census and aged 35, he is the Post Master living in the High Street next door to the Live and Let Live pub, in the shop which would later become Harfitt’s Bakery. The son of George Lee, he was also a Grocer and a Baker. It would seem, that the post office would be located at the house where the postmaster lived. THe shop later became Harfitt’s Bakery. 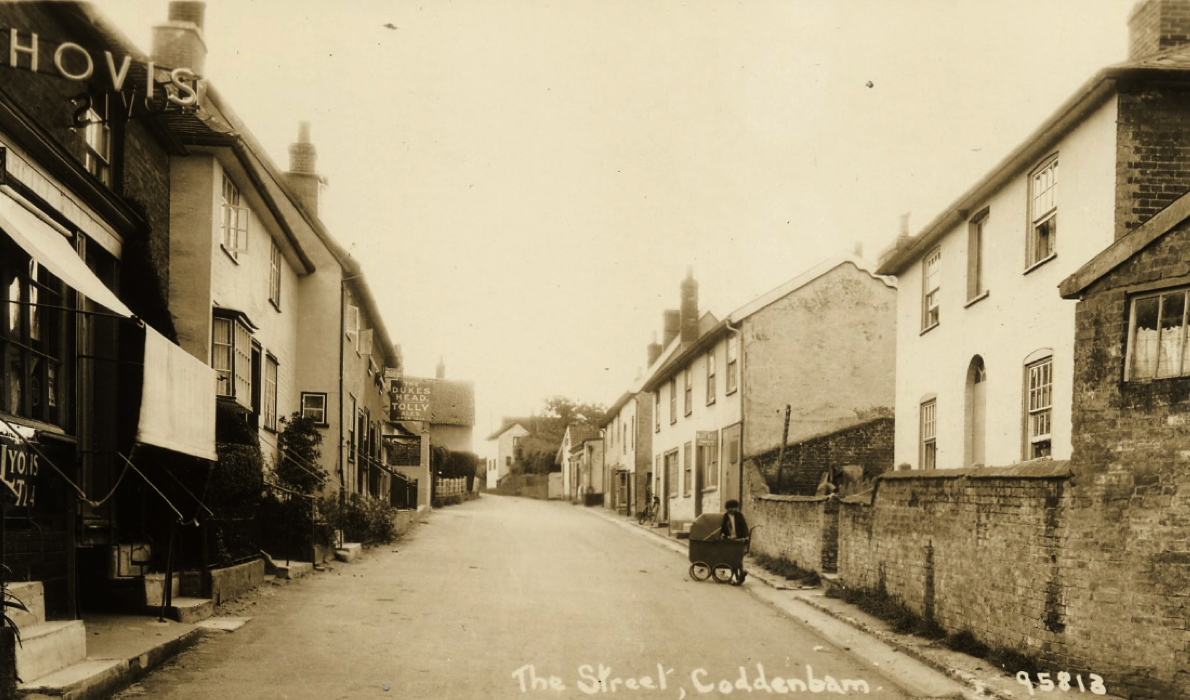 Photo: On the left is the grocery and baker’s shop and also the Post Office

Janet (also known as Netta) is the Post Mistress in the 1911 Census. Aged 48 she was the sister of Frederick and daughter of George Lee. She kept a shop on the opposite side of the street and ran the post office from there until George Warren who kept The Live and Let Live Inn died and the pub was closed. The Post Office moved over the road to the old Live and Let Live building, where it would remain for many years. 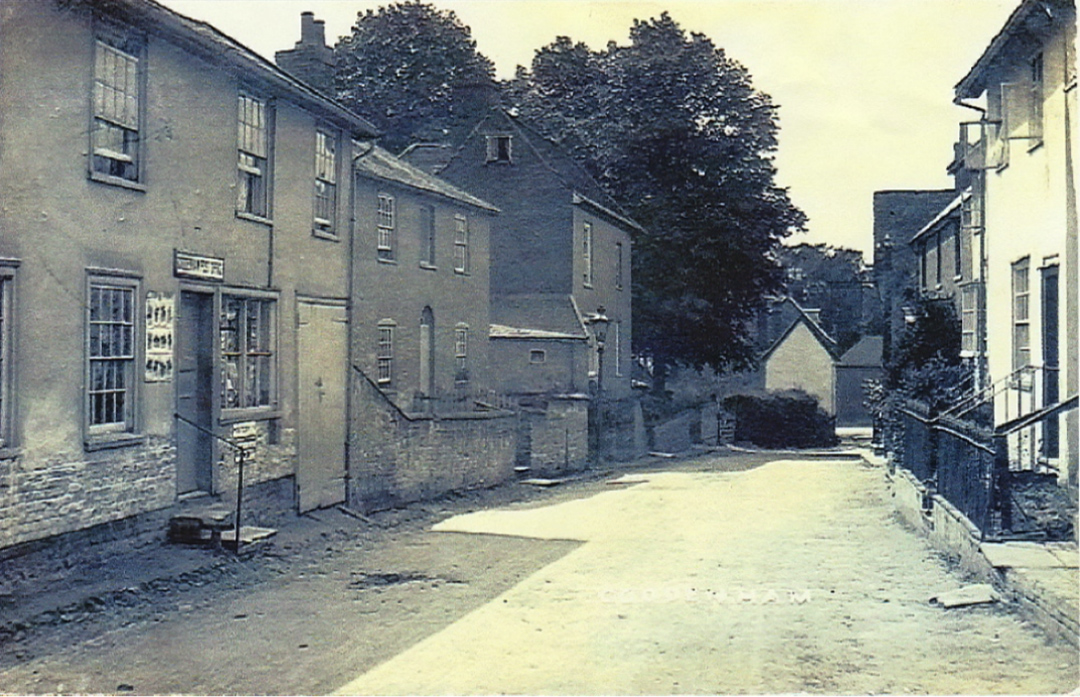 Photo: Post Office and shop on the opposite side of the street

Elijah was the next Post Master. Formerly Corporal Major Richer, 1st Lifeguards, he died in December 1929. Hilda Smith was his assistant during WW1

From the recollections of Mrs Hilda M Smith (nee Baldwin) –

“…..The Post Office was occupied by Mr and Mrs Richer.  Mr Richer had been in the Lifeguards, so he was called up to help train young men in London. They came to ask my parents if I would learn the work and live in, which I did.  I was still only a teenager and had to use a telegraph machine almost like a clock face – the sad thing about it was that I often had to take messages off from the War Office stating that certain men locally were missing, believed dead etc.  This was a grim task concerning young men I knew “

In the late spring or summer of 1929, the Post Office and the old house adjoining, which had become the property of Lady de Saumarez, were restored. Much of the old carved timberwork was exposed and the pargetting was matched to the old pattern. In the course of these alterations two small mullion windows were discovered and glazed in the Post office. (Rev W M Lummis MC from “History of Coddenham”) 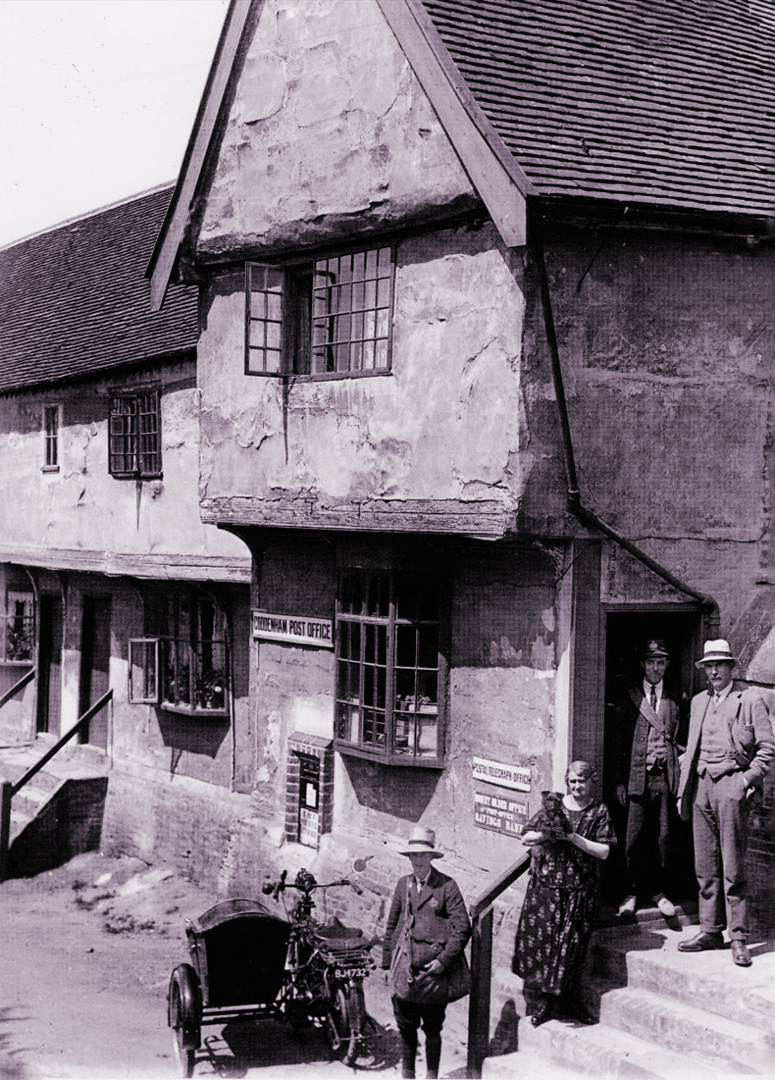 Photo: This was taken before the 1929 restoration when the Post Master was Elijah Richer with his wife Judith Anna. It is likely that Ernie Waspe is one of the other men as he was postman before becoming the Post Master 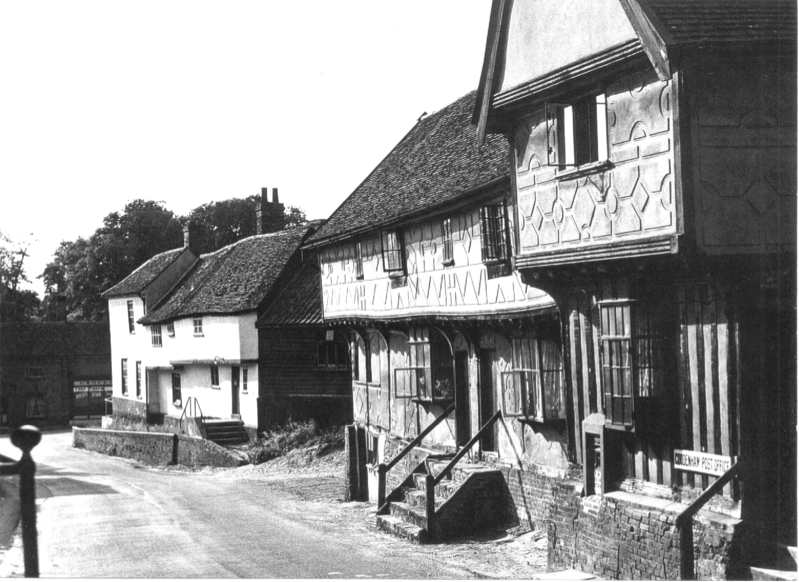 Photo: After the 1929 restoration

Judith  the widow of Elijah became Post Mistress after the death of her husband with her sister, Ada Simpson, as her assistant.

Ernie ran the Post Office after Mrs Richer, with Kitty Catchpole as his assistant. His brother Willie ran the grocery shop and another brother, Alfred, kept the Duke’s Head.

” The post office looked like a post office on those days. Ernie used to smoke and the post office was always full of smoke. There was a big old telephone box in the corner. You heard all the village jokes because everyone collected there. He had a big desk with a cap on a peg by his side. When Ernie left school he went to Cambridge and then joined the army. He was an officer. He was seriously wounded in the First World War. He got a wound in the brain and a surgical doctor there, an Australian, took the bits out. He lived through that and they brought him home. They were afraid to move him. He went to hospital in Fonnereau Road. They put a piece of bone in his head above his forehead. It looked terrible, it used to flop up and down. He should have gone then to be made lieutenant – he wasn’t too well I don’t think! He came out of the army unfit and came back to Coddenham. He had a go at trying his own haulage busness and a taxi service, besides doing post rounds. Finally he took over the Post Office…… (from recollections of Gracie Waspe being interviewed by Bernard Baker at 100 years old in 1986)

Marian was Post Mistress from 1971 and stayed for 18 years. Sheila Cobbold remained as her assistant with Brenda Goodchild

Ann was Post Mistress from 1989 until 1995, when the Post Office was transferred into  Gudgin’s shop. Almost back where it started.

Roy was the Post Master from the 24th January 1996 and his assistant Post Mistresses were:  Brenda Goodchild, Sally Garrod, Nicki Semmence and Melanie Hobbs. 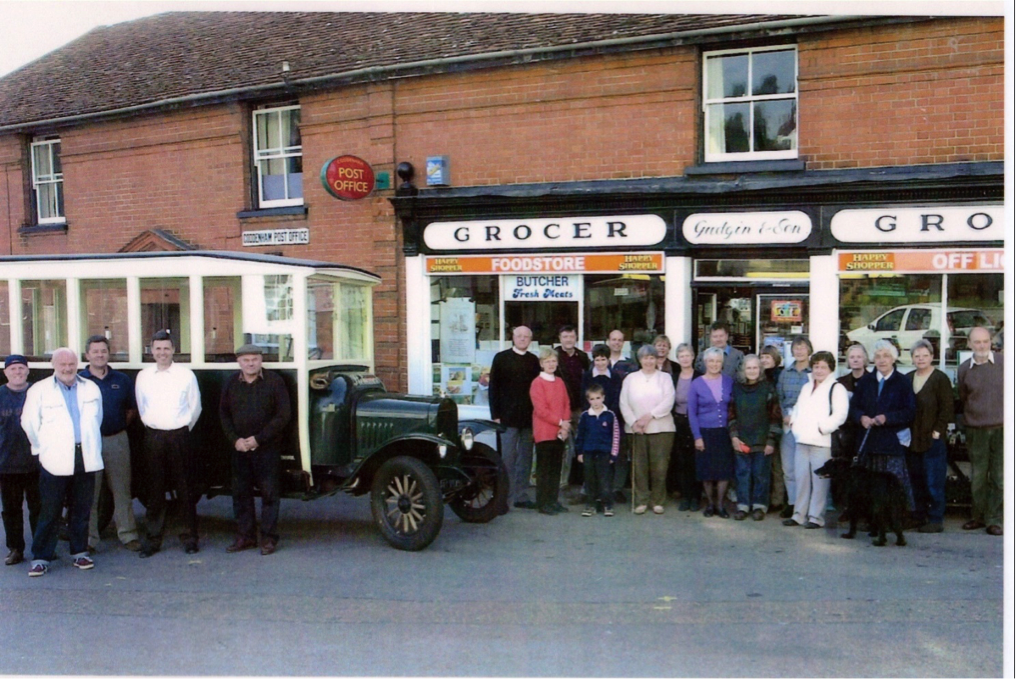 Photo: Where the Post Office is today. Taken in 2000 for the Millenium Year