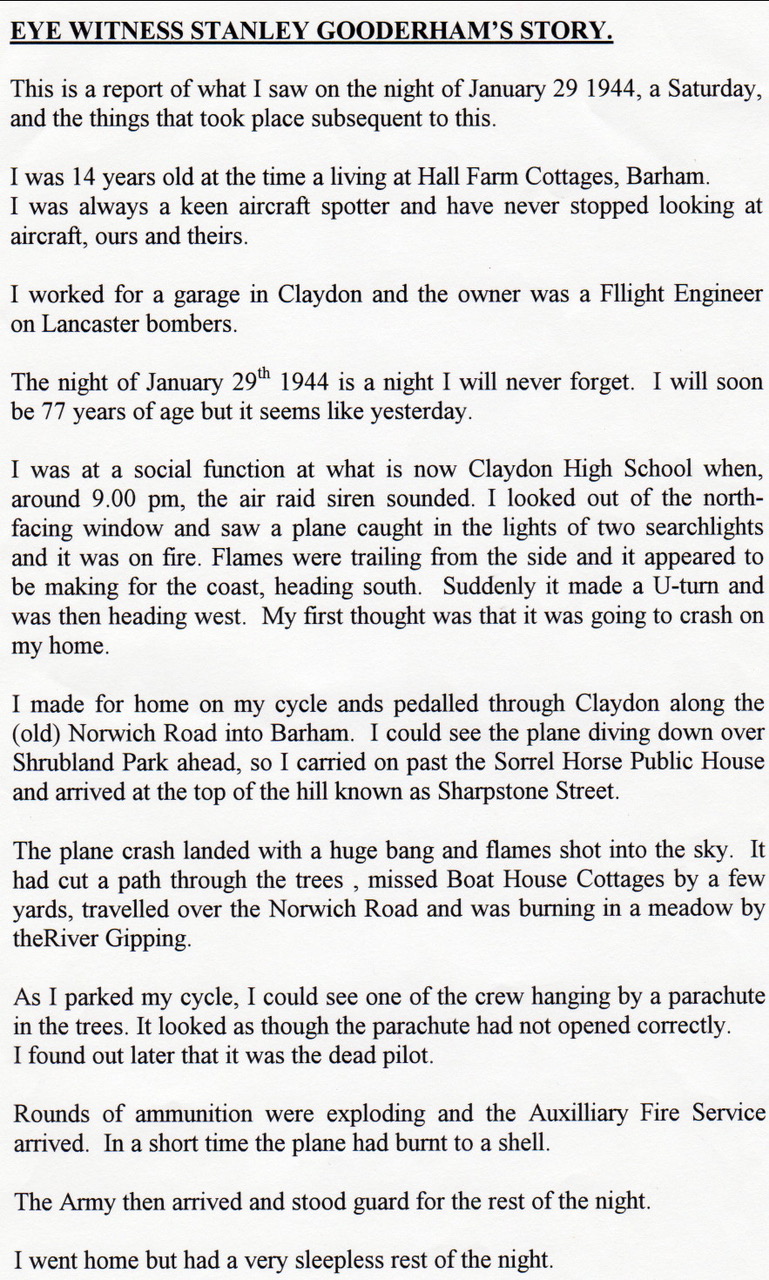 Item Location: Referencing the Norwich Road and the River Gipping

A recollection of pedalling, a plane crash and a parachute.

This is a report of what I saw on the night of January 29 1944, a Saturday, and the things that took place subsequent to this.
I was 14 years old at the time a living at Hall Farm Cottages, Barham.

I was always a keen aircraft spotter and have never stopped looking at aircraft, ours and theirs. I worked for a garage in Claydon and the owner was a Flight Engineer on Lancaster bombers.

The night of January 29th 1944 is a night I will never forget. I will soon be 77 years of age but it seems like yesterday.

I was at a social function at what is now Claydon High School when, around 9.00 pm, the air raid siren sounded. I looked out of the north facing window and saw a plane caught in the lights of two searchlights and it was on fire. Flames were trailing from the side and it appeared to be making for the coast, heading south. Suddenly it made a U-turn and was then heading west. My first thought was that it was going to crash on my home .

I made for home on my cycle ands pedalled through Claydon along the (old) Norwich Road into Barham. I could see the plane diving down over Shrubland Park ahead, so I carried on past the Sorrel Horse Public House and arrived at the top ofthe hill known as Sharp stone Street.

The plane crash landed with a huge bang and flames shot into the sky. It had cut a path through the trees , missed Boat House Cottages by a few
yards , travelled over the Norwich Road and was burning in a meadow by theRiver Gipping.

As I parked my cycle, I could see one of the crew hanging by a parachute in the trees. It looked as though the parachute had not opened correctly. I found out later that it was the dead pilot. Rounds of ammunition were exploding and the Auxilliary Fire Service arrived . In a short time the plane had burnt to a shell.

The Army then arrived and stood guard for the rest of the night.

I went home but had a very sleepless rest of the night.

Any cookies that may not be particularly necessary for the website to function and is used specifically to collect user personal data via analytics, ads, other embedded contents are termed as non-necessary cookies. It is mandatory to procure user consent prior to running these cookies on your website.