About the Community Shop

A village shop serving and supporting the rural community – since 1696 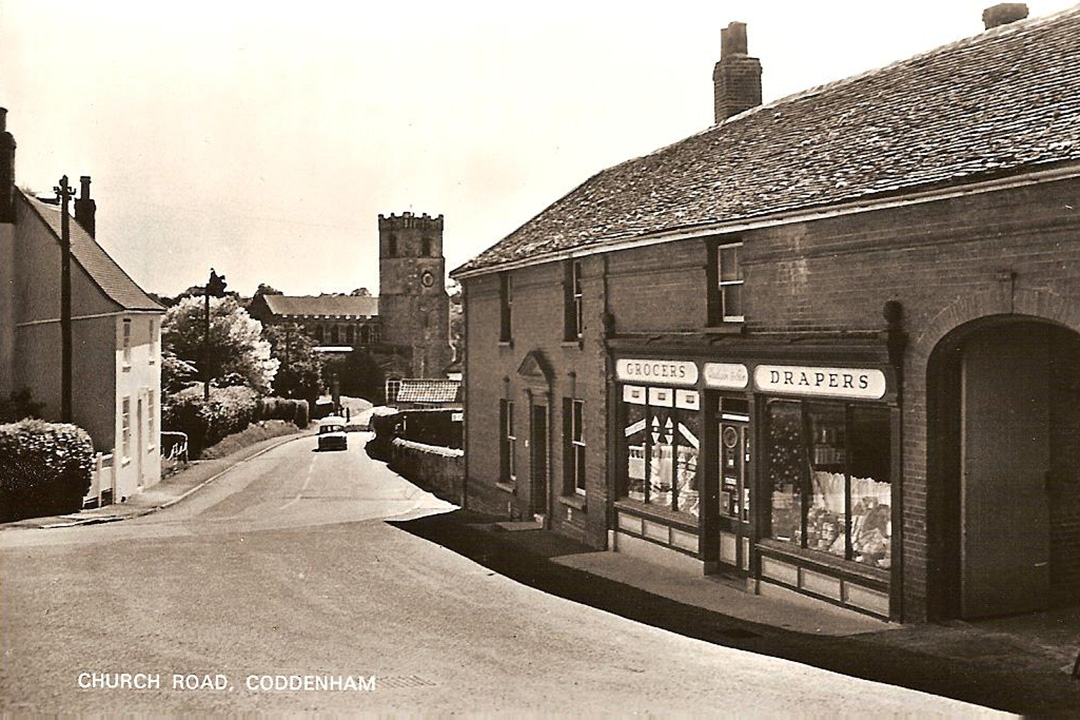 Records tell us that there has been a shop on this site in Coddenham from at least the late 17th century.

For most of the last 100 years the village shop has been owned and run successfully by the Gudgin family until the retirement of Roy Gudgin in 2001  For the last few years, the shop has been let as a village store, with the most recent leaseholders, after 10 very successful years, announcing their retirement  and closure of the business in 2019.

With this news, the village of Coddenham came together. With the support of the Gudgin family and help from the Plunkett Foundation, a group of villagers formed a Community Benefit Society,  Coddenham Community Shop Ltd, to raise the funds necessary to open, run and manage the shop for the community.

The initial funding campaign raised over £50,000, gaining nearly 150 shareholders and with a shop manager appointed and with 40 volunteers signed up and willing to help, Coddenham Community Shop opened for business on September 2019.

Coddenham Community Shop Ltd is owned by the community and any profits are re-invested in the business or distributed for the benefit of the wider community.The business is overseen by a management committee made up of local people volunteering their time and expertise.

Our village shop was a shop way back in the C17. With the stable yards, gardens & an orchard, much of which are still there today. The first documents we have are dated:

And just to put this date in the context of those times, The Civil War was in the past, Charles II had been restored to the throne and after him came James II & it was now in the reign of William & Mary.

ROBERT GLOVER (collar maker) had a loan from JOHN DEYNES of Jordaines now  (Manor Farm) This John Deynes MD had been in the service of the Parliament under Oliver Cromwell and played an active part. He was a Lieut Colonel at the Battle of Marston Moor & was Major of Horse at the Siege of Colchester.  The loan he made to Robert Glover was for £240 to enable him to purchase the property. Robert Glover defaults and the property reverts to John Deynes. So we do know that there was a shop here in 1696 & possibly earlier, which means it’s been a shop for well over 300 years.
John Deynes died in 1703 & ROBERT GLOVER makes another attempt to buy the premises from his executors in:

This time the Rev Balthazar Gardemau loans the money, but again Glover defaults and it reverts to Gardemau. In:

yet another attempt is made & ROBERT GLOVER has a loan from a widow called Charity Wickes. This time, the sale did complete in 1712. Glover’s son Robert (grocer) inherits after his death and after this Roberts death it is inherited by his son John.

And his EXECUTORS SELL TO RICHARD KEEBLE (carpenter) –  five years on in :

RICHARD KEEBLE SELLS TO WILLIAM NOTCUTT (grocer & linen draper) for £317 he had a loan of £250 from a John Rodbard (surgeon of Ipswich). He also fails to pay off his loan and in:

WILLIAM NOTCUTT SELLS TO ROBERT CREAME (grocer from Diss, Norfolk) for £630, of which £250 to be paid to Rodbard to repay Notcutt’s loan, but this was made into another mortgage by Rodbard.

It would appear that Robert Creame (shopkeeper) was in financial trouble & there was a lease from his various creditors, listed as Edmund Railton of London (merchant), Joshua Kenworthy of London (linen draper), William Ransom of London (tobacconist), Thomas White of London (oil & colourman), Cooper, Garrett & Taddy of London (tea merchants & Stephens & Dell of London (hosiers). He was to sell all & satisfy his creditors after discharging his mortgage. He was declared bankrupt & told “to sell by auction or other public sale to the highest bidder”.

CREDITORS SOLD TO ROBERT SEAMAN (grocer & linen draper), who took on the mortgage from Rodbard & no more problems seem to arise.

EXECUTORS OF CHARLES PRITTY SOLD TO JOHN NEAVE (grocer) for £600

EXECUTORS OF THOMAS ADAMS SOLD TO STEPHEN BERESFORD TWIDDY OF BANHAM (grocer) for £850 with a mortgage for £600.

TWIDDY WAS DISCHARGED FROM MORTGAGE & OWNED PROPERTY OUTRIGHT. He was the man who re-fronted the shop & rebuilt the attached cottages at the turn of the century.

After the death of P J Lewis, his executors sold to Albert Francis Moore GUDGIN (grocer of Ipswich). His son Dudley & his wife Joan took over from him & in turn their son Roy & Ann his wife.

We have arrived in 2020!  97 years on and a Gudgin still owns the shop premises and it is still a grocers’s, no longer a draper but it does sell gifts and is a part time Post Office. Roy & Ann retired in 2001 and the shop is now under the care of Coddenham Community Shop Ltd. The heart of the community in a village that has survived – luckily for Coddenham!

(With thanks to Coddenham History Society)

The Village Store has been in the Gudgin Family now for 97 years and the following recollections are from Roy’s mother, Joan Gudgin.

Albert and Millie Gudgin came to Coddenham and purchased the Village Stores from Mr Lewis in 1922. Before then Albert had been the manager of the Co-op in Carr Street, Ipswich, and had therefore had ample experience in the retail trade. Millie’s father ran Townsends Fish Merchants, which was opposite Aldertons in the Buttermarket so it was likely she was no stranger to the trade either. Dudley would have been 12 years old then and Vera about 17. They said when they took over the shop the whole place was painted in green distemper.

My earliest recollections go back to when I first met Dud. I used to go over to the shop at the weekends and when Dud was in the greenhouse I used to talk to Millie and Albert. They worked very hard but lived well. We always had High Tea with salmon and salad, great tinned peaches and cream. Albert used to take a glass jug over to Mr Wink (Willow Farm), who would fill it with thick cream for a couple of shillings. They liked their food. On winter nights Albert used to get all the odd bits of bacon, mushrooms, tomatoes and sausages and cook them up in a colossal frying pan. There was this marvellous smell of this massive ‘fry-up’ all over the house. They were wonderful ones for parties and were one of the first people to own a car in the village. One was called an ‘Overland’ and the second one was an Austin – this would have been about 1928.

After we were married we lived at the shop. Millie and Albert lived at one end and we lived at the other. Pigs were kept down the bottom of the garden and two were slaughtered each week for the meat. They used to make their own pork cheeses, lard and sausages. The counter near the cellar door was like a big chopping block where the meat was cut up. It had to be scrubbed every night. There was no sanitation then, only a water pump in the garden and three pails in the kitchen. I used to have to get up early to get the drinking water and water for the old copper.

Everything came in bags or boxes which were nailed down and their contents had to be weighed and bagged – prunes, raisins, sultanas, apricots, salt, tea, etc. and sugar which was always in a blue moirebag. We had some lovely tasting cheeses which were left to mature. It was hard work in those days, especially at Christmas time. Black celery, big bags of sprouts, etc. used to be out in the frost and snow and we’d be making up orders until 1 o’clock in the morning. Everything seemed so cold in those days – our hands were continually frozen. Sometimes the men would work all through the night and I used to get up at 3 o’clock in the morning to do the baking and then help them.

The shop was a drapers as well with a big counter on the left hand side by the window. I remember the big brass measure for measuring the material. Millie ran a Christmas Club which was funded by the Gardemau Trust. So much money was allotted to those people in the village who were not so fortunate and when it got near to Christmas, Millie would order extra sheets, towels, tablecloths, etc. ready for people who would want them. I remember the old buttoned shoes, hobnail boots and galoshes which used to be hung up outside either side of the shop doonway. In the middle of the shop was a display – made up with orange boxes in tiers and ahways looked especially nice at Christmas. The left hand window was always decorated at Christmas too.
A horse and cart was used to deliver the groceries. They were kept in the stables at the bottom of the garden and looked after by Fred the horseman. We also had a gardener, and Billy Button used to work for us in the shop and deliver the groceries as well.

Millie was very house proud and her home was her castle and one day I was in the kitchen with her – it was about 11 o’clock in the morning when suddenly a lady appeared in the kitchen. She’d walked in through the front door, through the long arched hallway and along another passageway and stood in the kitchen doorway. She was a marvellous looking person, tall with blond hair and a picture hat and very superior. She said, “I have been knocking at the front door and couldn’t make you hear. I’ve come to see you about having evacuees.” It was the Lady de Saumarez from Shrubland Hall, but I don’t think Dud’s mother was very impressed! She was certainly not very pleased that she had walked into her house uninvited. Vera (Dud’s sister) and Edward Semmence were living at “Hillside” at the time and they took in three land girls.