John Dover Moore was a butcher in Coddenham at the Old Butcher’s Shop in the High Street (now “The Limes”), from about 1830 until his death, 3rd October 1904, in his 96th year. He was a son of Elijah Moore, butcher at Claydon. 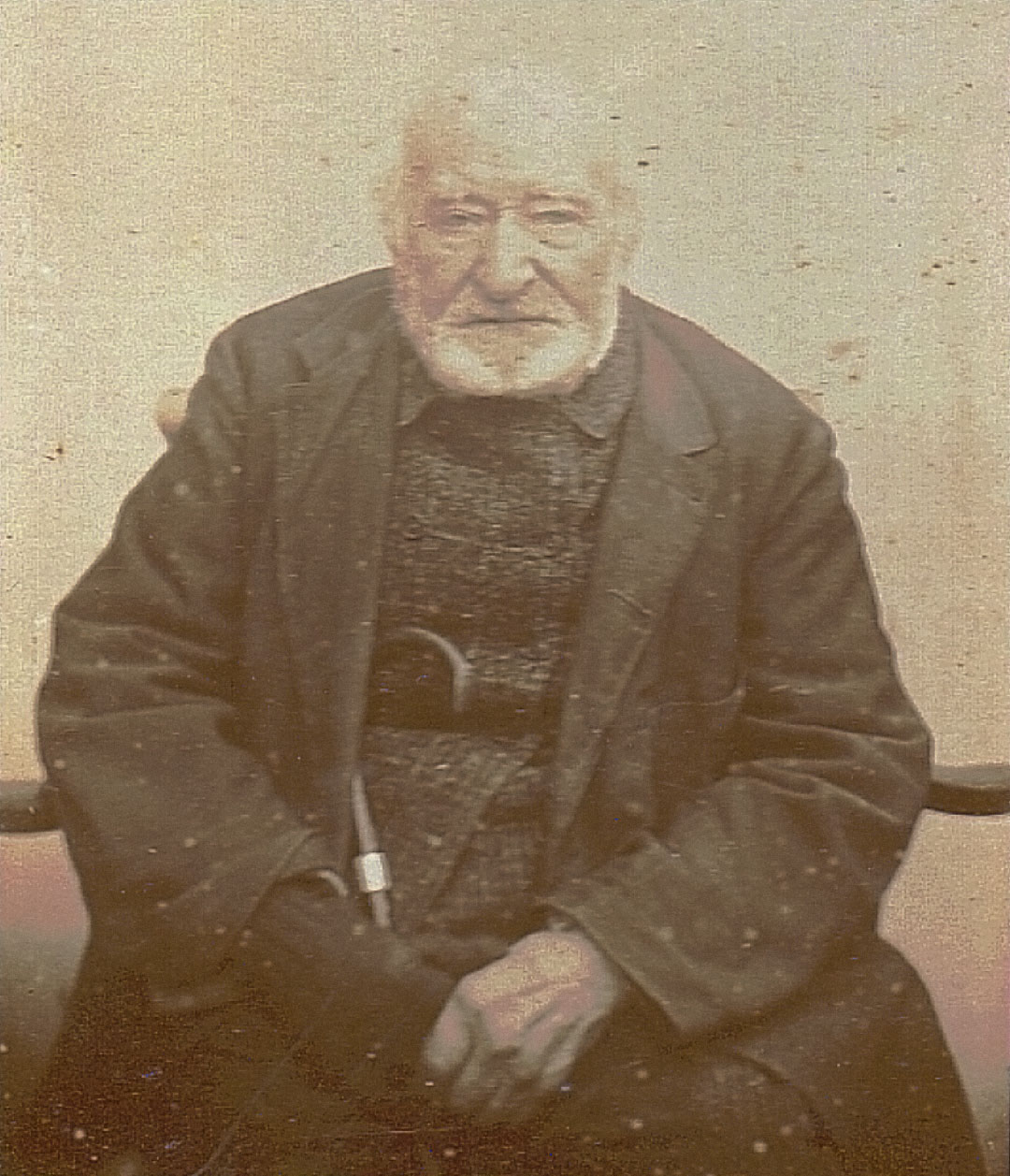 As a boy, John Dover Moore walked from Claydon to Coddenham to attend the school founded there in the previous century by the Lady Catherine Gardemau. He was entrusted to carry the letters until, blackberrying one day, he forgot them. There was no Sandy Lane then, and his way lay through Shrubland Park. The track passed close by the Hall. The old building there was pulled down, and the present Hall erected sometime between 1786 and 1830. An Act of Parliament permitted the closing of the old road and for Sandy Lane to take its place. John Dover Moore remembered Italian masons being lodged in Coddenham while they were beautifying the Hall at Shrubland.

At 13 years of age he was on Smithfield Market in London where his schooling stood him in good stead. As a young man of about 25 he married and came to live in Coddenham. Once a week he drove by pony and trap to Ipswich Cattle Market to buy a bullock and a pen of sheep. These were driven to Coddenham by a drover which meant for him a walk of seven miles there and seven miles back. In Coddenham, two thirds of the way up Lodge Hill on the right, was a square pit dug out of the hillside. There stray animals were impounded. It was ‘The Pound’. 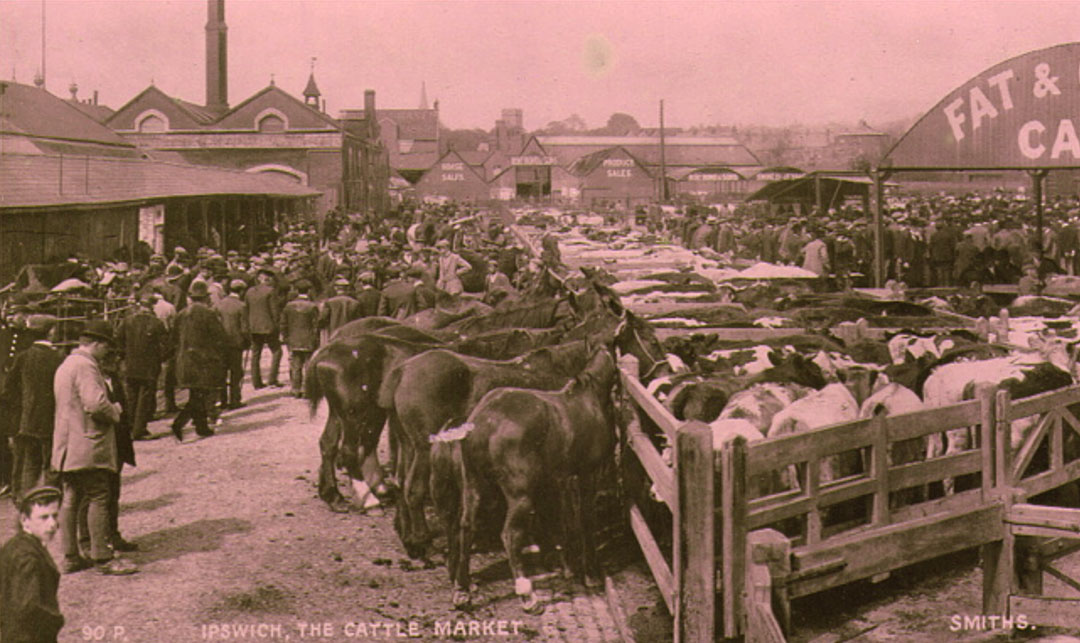 The butcher supplied good meat to the surrounding villages. He made his own skewers from gutteridge or pipperidge wood. This was sometimes hard to find. The skewers were about 9 inches in length, of white wood, and sharpened by hand. The block on which he cut and chopped his meat was part of a well-seasoned tree trunk which remained in use until 1985. 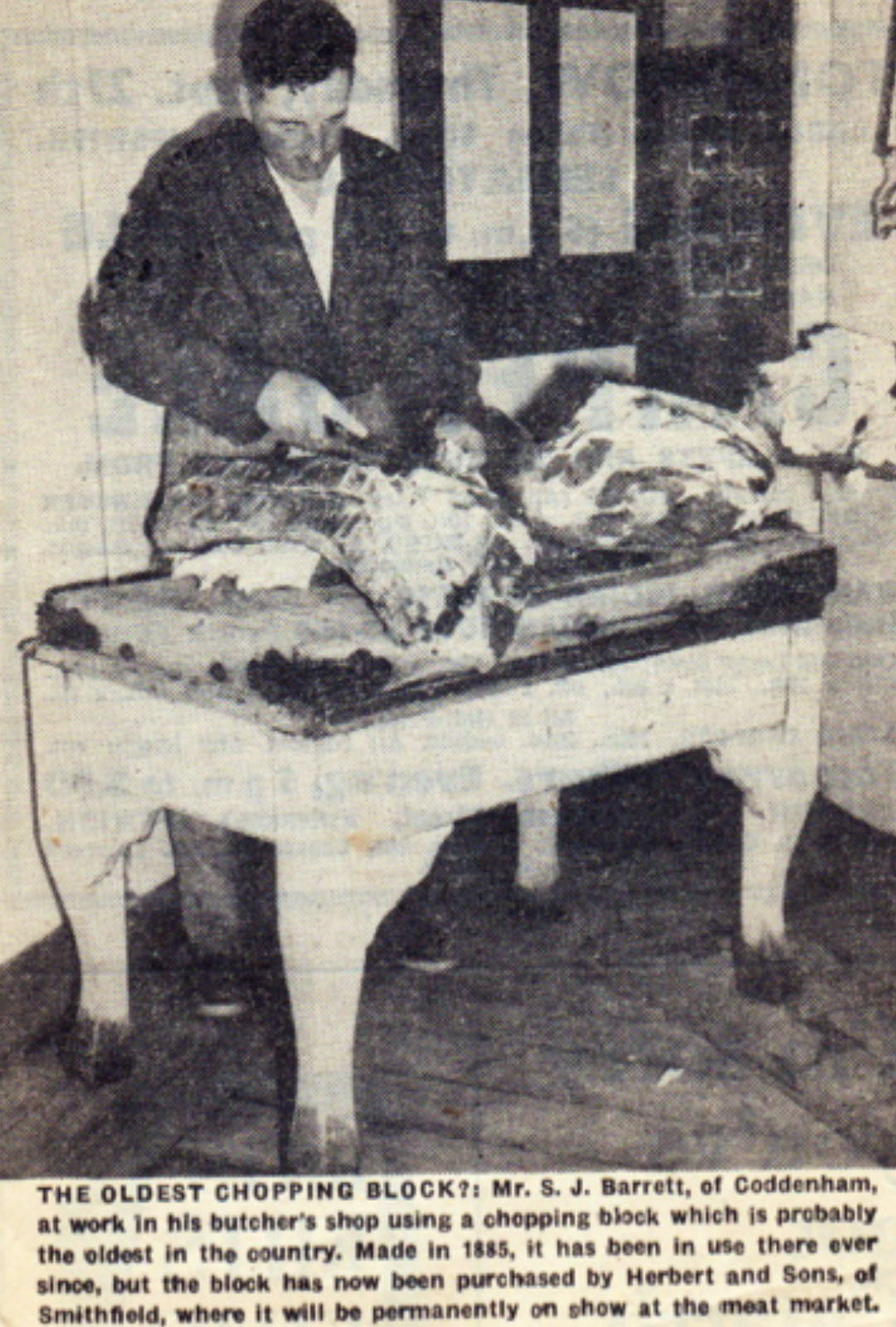 He was contemporary with Mr Fred Corder, the silk merchant, who founded the shop of that name in Tavern Street, Ipswich. Meat from the butcher in Coddenham was taken to Ipswich while blankets from Corder’s in Ipswich came back to the home in Coddenham. 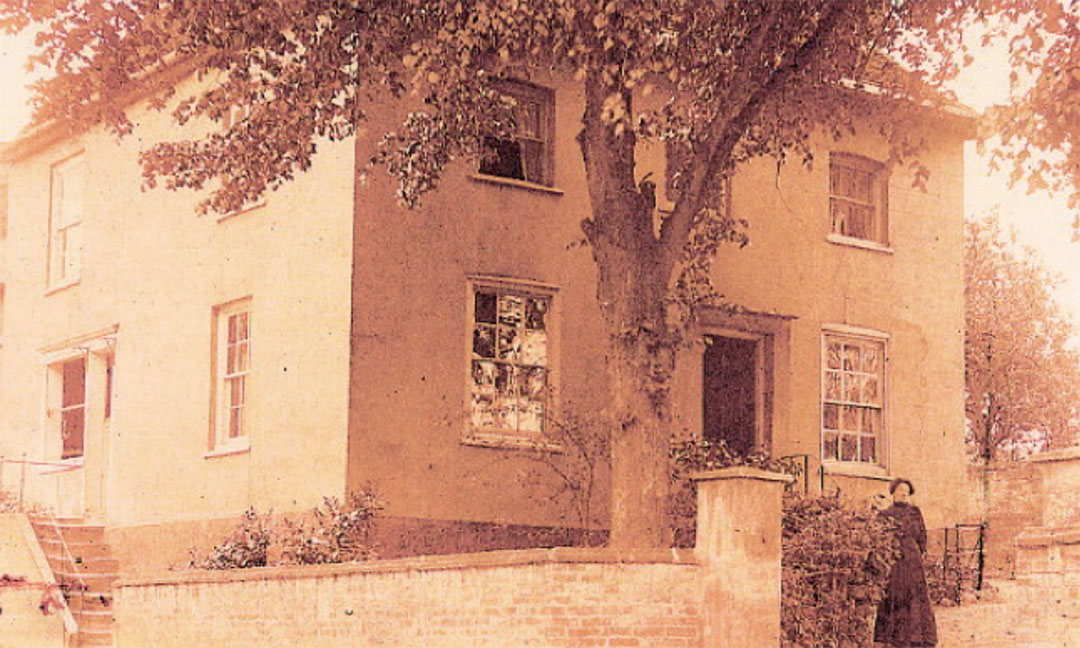 The sides and upper end of a cobbled yard were bordered by a slaughterhouse, a cart shed, a wood shed, a pig sty, a muck bin, a stable and a sheep house. A flint wall separated this yard from the orchard. In there, growing at random, were a Geneton, a Russet and a Dr Harvey apple tree and a damson. John Dover Moore liked to rake the orchard grass with a wooden hand rake, especially when he felt rain was near. The sheep grazed there while awaiting their turn in the slaughterhouse.

The slaughterhouse originally stood in the garden until, one night, thieves stripped the meat from the hanging carcasses. Thereafter, the slaughterhouse was at the back of the house and to the far side of a deep well. A blow from a poleaxe felled the bullock until, later in the early years of the 20thCentury, the humane killer came into use.

Bladders became children’s balloons. A cellar beneath the shop was the cold store for the meat.

The orchard abutted on to Love Lane, and the two red brick cottages standing there were part of the property.

One shilling and two pence was the weekly rent of each cottage, and every week the two pence was returned to the tenant by the butcher. 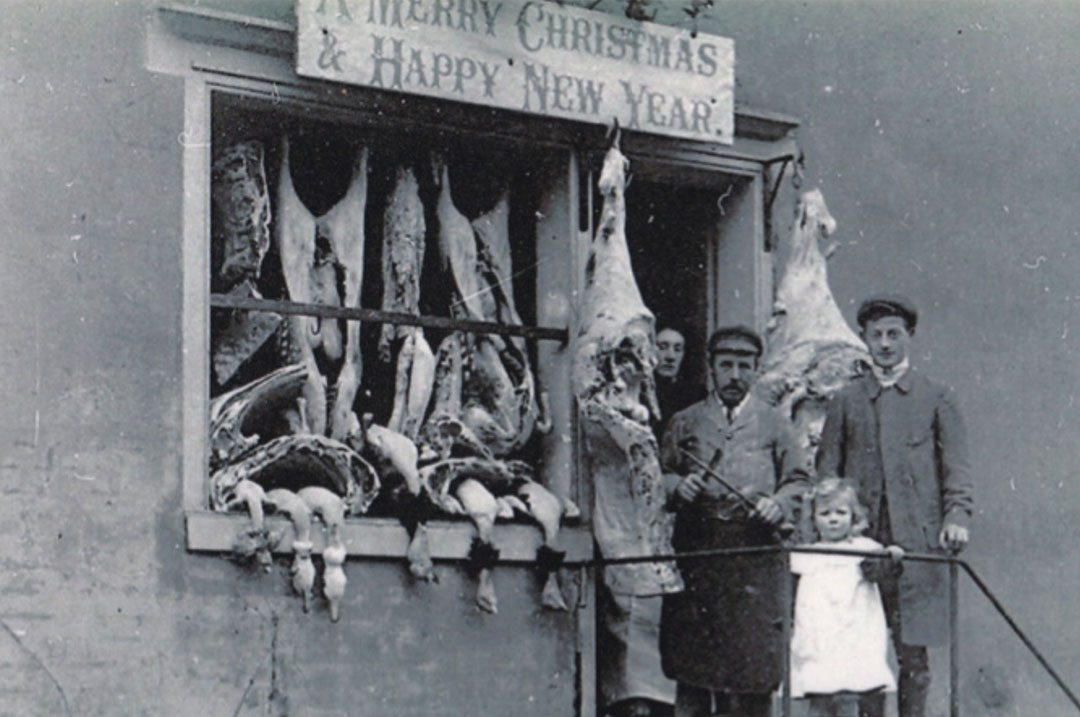 More than just the butcher

The butcher was also the Constable and Road Surveyor who bought stones from the local farmers which women had picked from the fields and put in heaps near the road. With these he had the roads mended in the autumn. The iron tyres of the carts and wagons helped to break up the stones and to fill the bad places on the roads.

John Dover Moore journeyed to the Great Exhibition at the Crystal Palace in 1851, and once said he had never slept a night out of the house in all the seventy years he had lived there. A granddaughter remarked that he had spent some jolly long days away from it. He thought, and said, that the Unions would be the ruination of the country.

He married Miss Francis Sophia Cooper from the farm half way up Claydon Hill on the left. There were two children of the marriage, a boy and a girl. To make them sit up straight at table he had made two long-legged high-backed chairs with tiny cane seats.

His daughter, Francis, married Adolphus Kitson from Spring Farm, Coddenham, and they went to live at Cedar Farm, Mendlesham. When the son-in-law needed to attend Ipswich Market he walked from Mendlesham to Coddenham, rode with John Dover Moore to Ipswich and back, and then walked home to Mendlesham the same night.

During the last decade of the 19th Century oxen were seen ploughing on the Dentlands.

On Sunday, John Dover Moore occupied one of the wooden box pews in the right aisle in the church, and in the afternoon sat at the dining room window reading a copy of ‘The Quiver’. In his early years he read by rush light (a rush inserted into a mold filled with tallow).

His son’s wife, Sarah Kitson from Spring Farm, died in her 36th year leaving five daughters aged from eleven months to twelve years. Their father absconded and the grandfather took the little girls into his home where they grew up under his supervision. 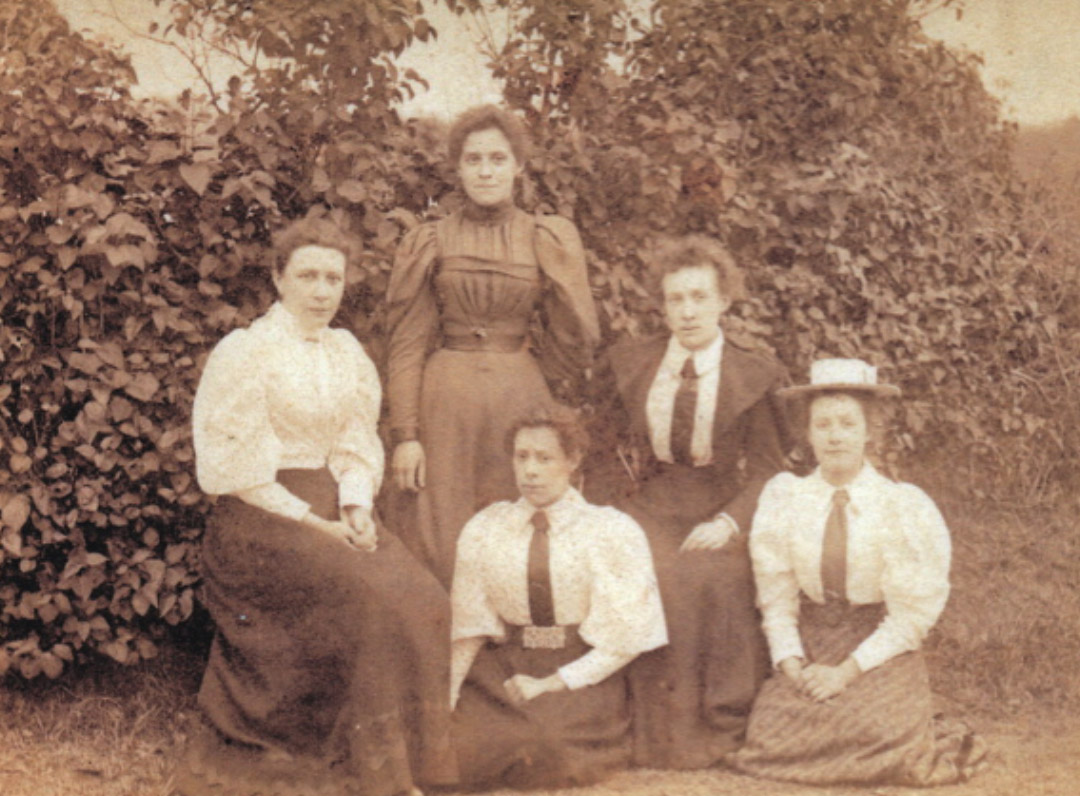 Middle life and beyond

In middle life he suffered a serious illness, and during that time a man in the village came in daily to tend him. Until shortly before his death he daily walked and rested in the church porch.

There he was tickled when a stranger presented him with a threepenny bit for telling him tales of Coddenham. His youngest granddaughter was with him when, with outstretched arms and happiness in his face, he finished his course.

He was buried in the lower churchyard without any memorial in accordance with his wish. 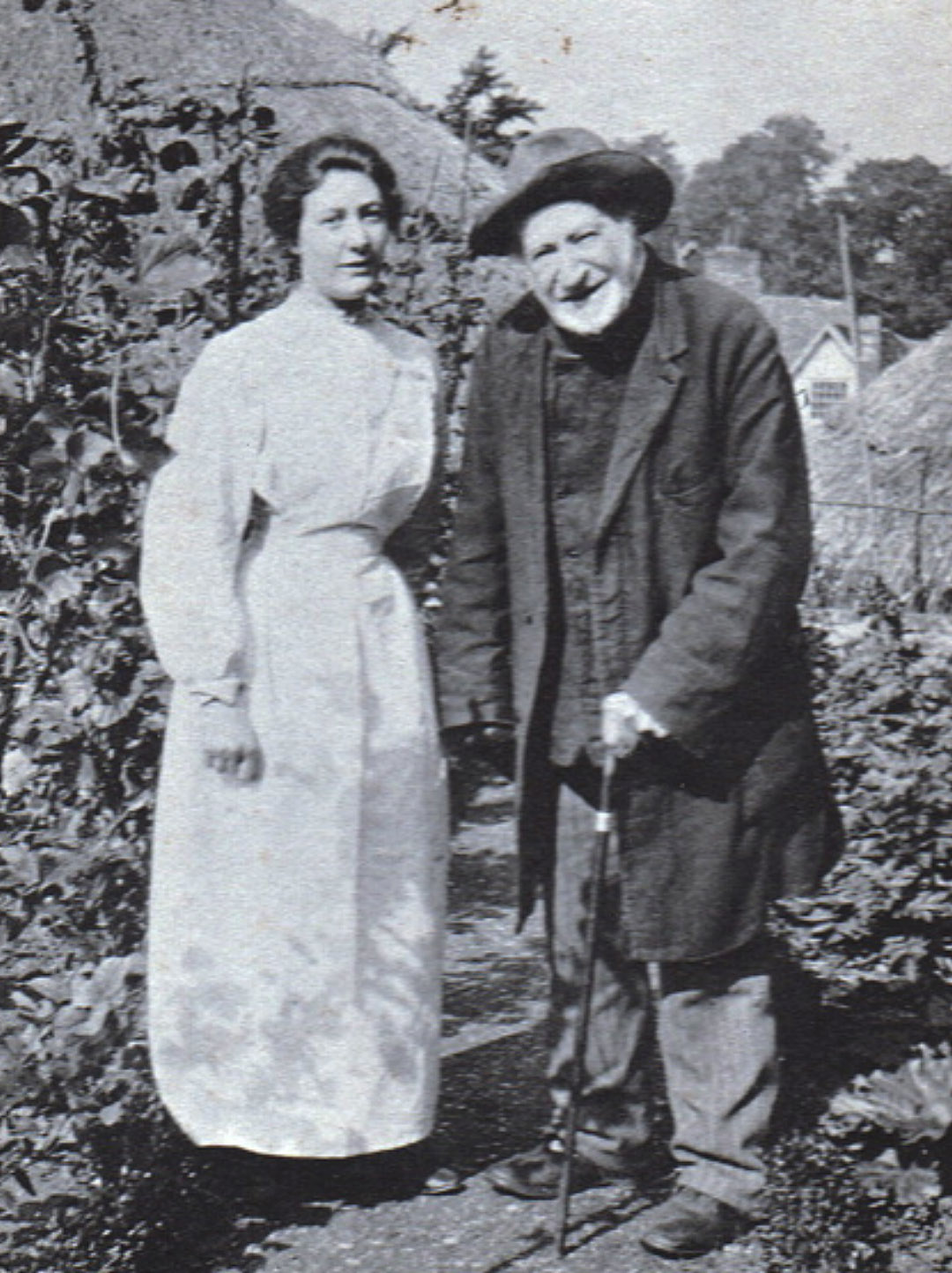 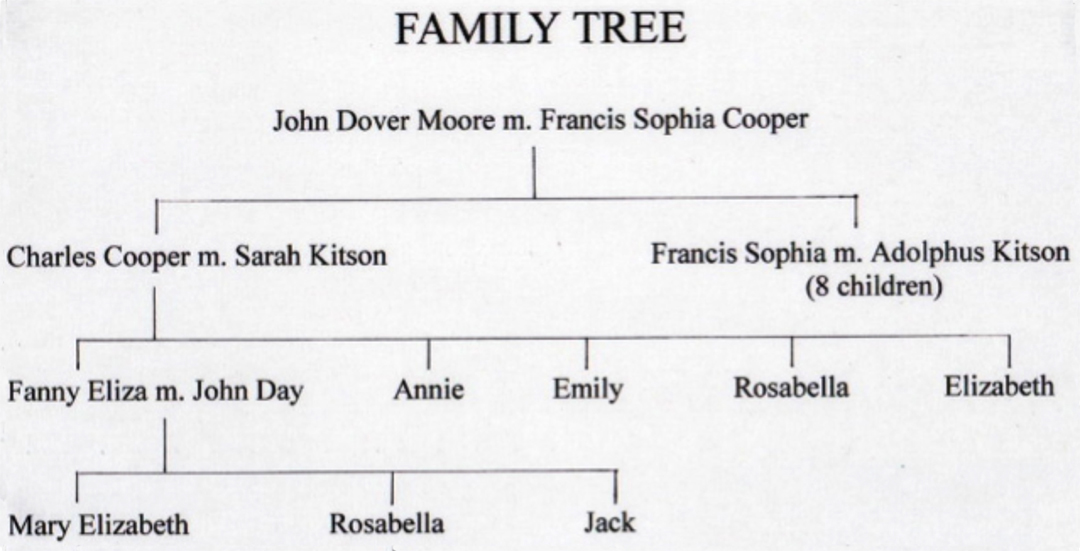