Mary Day was a prolific diarist and has left us with a wonderful window into her world and the people she shared it with in Coddenham. 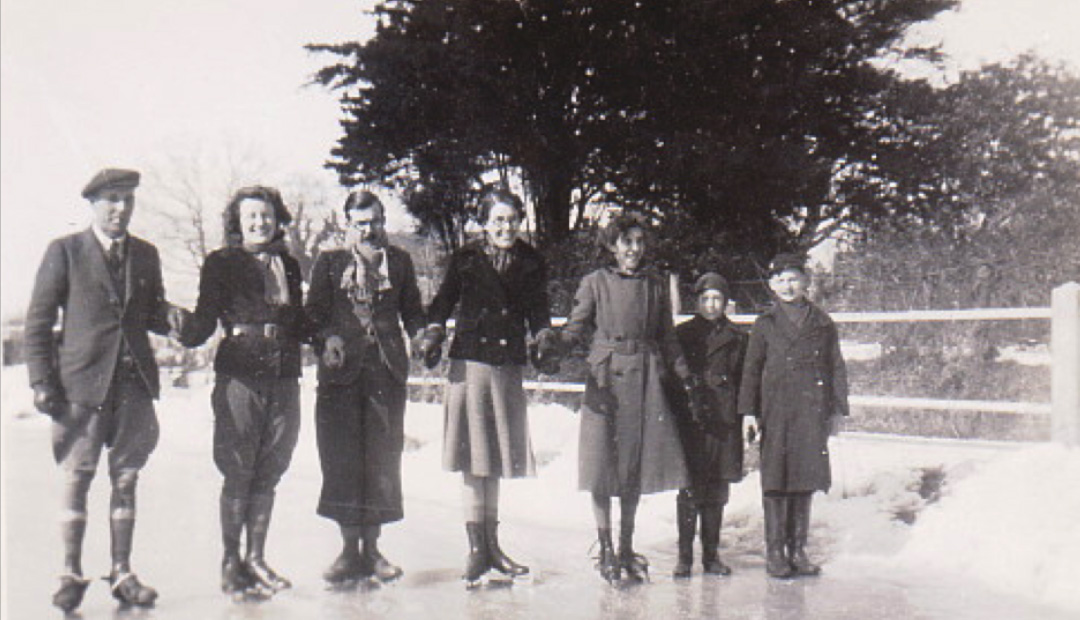 Photo: Jack (left), assuming that Mr Knight is the other man and that one of the ladies at his side must be “Jermy”, ”Bill” (third from right), the two boys?
The photo taken by Mary.

A fortnight ago during the dinner hour I went with the children sliding on Brett’s pond. The ice was thick and clear, and we slid as we chose over its surface. Coming home that night I overtook Miss Jermy who had been looking for a pond on which to skate. So, in the starlit evening I asked leave of Mrs Fox to skate on their pond. (Ivy Farm).

At 10am on Saturday, Jermy and I set off via Fox’s Grove, at the end of which we crossed so much ice she called it Little Ontario, and finally stiffly performed on the ice. The air was cold but the sun so brilliant that we could well imagine what Switzerland was like. The ice was marred by frozen-in parsnips, stones, a moorhen and twigs, but for the most part we circumskated them. We sat down far too hardly once. The previous weekend had brought a slight thaw and thus allowed this ice to improve itself from when I saw it on January 3rd. In the afternoon Bill accompanied us and the three of us went up and down together to my music.

On Sunday morning Jack made a quartette & skated off straight away while, in spite of Saturdays effort I hardly dared move at first. The sun so thawed the surface that falling forward I mopped up a good supply of water. In the afternoon, the five of us went for the loveliest of rides to Redisham. At Walpole on the way home we saw a sight. On the gently sloping sides of a little valley was an ice cake stretch of ice and on it was a country company, some sliding on long slides, others speeding and twirling on skates while others again were having a cut at ice hockey. From Pettaugh home Jack drove through a dense white fog.

On Monday I sang the praises of a “weekend in seven years” & Mr Knight cycled home with me. Having fitted him up with Jack’s boots & my skates, Bill and I and he with Jermy dashed up to Fox’s. He fell in every way a beginner should fall, to the huge delight of some village on-lookers. After tea with Jack who, having seen us on Fox’s pond had been to Needham and bought some skates, we five went up to Miles, where with Chris, Ken & Eric we had a most jolly time in the moonlight.

On Tuesday there were light falls of snow, but undeterred Mr Knight bought boots and skates and drove in his car to examine Fox’s pond. With Bill and Jermy and brooms we returned, swept the snow away and skated until 5.15. Due to this I was late at Stonham Aspal’s C.D. party. Riding home from there in Bickers bus we rode through a white world and through a beautiful world. I walked to school next morning in 1 hr 10 mins.
Trying to cycle home in the afternoon I thought my nerve had gone. Never had the roads seemed so treacherous. Invariably I found myself having to jump off on the left-hand road- side, to avoid falling. In places the snow was in shifting variously shaped cakes & these Canon Fleetwood took very steadily. A moonlight skate with music on Thursday. A fresh fall of snow made the roads terrible again on Friday morning and I was much cheered and assisted by Jack Hammers as far as Bosmere Bush.Both wheels slipped and turned irrespective of my presence or desire.

Saturday January 20th we all agreed was the coldest morning. Bill blew clouds of steam from the radiator when she drove the men to Ringshall and Hole’s lorry was set fast at Gosbeck. I thought of approaching Jermy to try sweeping Fox’s pond again, but finally rode to Ipswich with Jack through such a beautiful white world. In the afternoon J and I went to Grove Farm, Mendlesham where we saw the 6 month old twins. After that I walked up to High Elms (now Holly Farm) and saw the snow-laden pale powder blue sky meet the snow of Spring Hill.

To Kirk (church) on Sunday morning with an umbrella to keep off the snow, and Bill. The congregation were eleven. During the afternoon there were real snowstorms and at night only thirteen people and no organist at church where Jack collected.

What a world! At White Arches the roadman had cleared a drift and from there I walked with him sharing the beauty of the over-hanging mountaintop-like drifts on the left. Between Creeting and Stonham I lost my watch: there were icicles from Mr Spall’s thatch. Cycling home, I have rarely felt colder. Three fingers on each hand seemed to die – at which Jack laughed. From the road spring downwards, Spring Hill was ice-covered. The spring was inky black and around its edge the dazzlingly white snow curved and drooped. A day from being full moon caught a thousand diamonds winking on their flawless cushions. The trees were hung with a hoar-like frost, an owl sailed noiselessly into the light lifting mist. By Wednesday afternoon the south wind blew softly & what a treat! Never had I seen the roads so white for so long. Thursday evening cycling home from the Boot Club Whist Drive, whereby cutting I lost third prize, the moon shone but it was not nearly so cold.

This afternoon hail dashed against the windows and stung my face as it fell amid snow and rain on my homeward way. Since turning, in time it has snowed to the depth of three or four inches and every twig and spray of the honeysuckle and rose bears its snow-white burden.

Sat 27th  January: Driving with Jack to Ipswich was like driving through a Canadian scene, so beautiful were the snow burdened trees of Sandy Hill. The silly townies having spoiled the snow were carrying it away in lorry loads. Sunday Bill, Jack and I to Redisham. En route we saw three grotesque and tremendous snowmen, the best in Walpole village. Nearly everywhere sand had been sprinkled from a lorry onto the roads. Monday a wicked N.E. wind made it nearly unbearable and caused 4’ deep drifts sometimes a mile long along roads where the snow was blown from the fields. John Long’s was unreachable by lorry, also Farrow’s on Winston Green. I was thoroughly fed up and cross. Upon later and closer view, these drifts were wonderful.

From Crowfield Rectory to the cottages at top of Choppings Hill the car ran through a narrow lane. Half the road was still 4’ deep in snow which men had cut through with spades and which stood as a white wall with their square spade fulls forming a tessellated rampart. The gate on the right just before Fox’s moat was quite buried. Jack and Read saw a dog run over the top of it. Turning up to John Long’s after passing between straight walls of snow there arose an 8’ wall of snow with its castled top.

On Wednesday Jan 31 a strange white mist enshrouded all the land. By February 1st the thaw almost stopped and there was a keen wind frost. February 2nd, a snow banked lane the other side of Grimwood’s – snow completely hid the hedge. Fatty Watson turned over here in car and gave men who dug him out £1. Sunday February 4th a steady drip, drip, drip. Bill and I literally struggled through the melting squelching snow up to church to find 8 at evensong. On Monday morning I nearly despaired of reaching Creeting and was 1 minute late. Coming home, cycling was possible in the wheel-tracks for the first time for weeks. Wednesday February 7th, really beautiful. Snow still lying in scattered patches among the covert trees. The deep furrows in every field, snow filled, streaking across the brown earth and every hedgerow trailing its snow-white train. The deep dark flood waters were covering River & Home meadows, while in the next field the icy stretches across the sugar beet furrows became mirages of the real flood waters below.

Mary Day was a prolific diarist and has left us with a wonderful window into her world and the people she shared it with in Coddenham. She was a school teacher at Stonham Aspal from 1928 to 1938 and then went on to become Head Mistress at Creeting St Mary, until with regret, she gave up her teaching life to be housekeeper for Jack and Rosabella (Bill) when they purchased Coddenham Hall Farm in 1940. This account is from the time when she was still at Creeting St Mary School earlier in that year.

There are many people today who still remember Mary from Sunday School at Coddenham and she remembered all of them.