Coddenham Village History Club came into being through the legacy left by Canon William Murrell Lummis MC in the form of a written History of Coddenham compiled by both him and his father over many years. 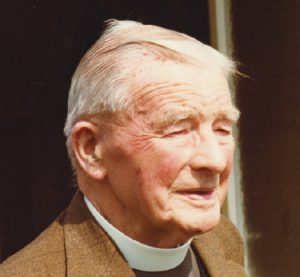 Born 4 June 1886 he was the eldest of three sons and four daughters born to George Murrell Lummis (1860 – 1912) and Louisa Sparrow (1854 – 1933. Cannon William Lummis spent the days of his youth in the village. He worked as a clerk in the Magistrates’ Clerk’s Office in Coddenham before enlisting, at the age of 18, with the 11th Hussars as a trooper in 1904 – the start of a military career that would span almost 3 decades. His brothers both died in France during the 1914-18 war. William survived, gaining a Military Cross as an officer of the 2nd. Battalion Suffolk Regiment in August 1918. He rose through the ranks ultimately being promoted to the rank of Captain in 1928. After retirement from the army in 1930 he was ordained Deacon in the Church of England in the same year.

Throughout his life he researched and collected information about Coddenham; adding to and expanding on the work done by his father. He made four copies of the “History of Coddenham”, two of which are now in the Ipswich Record Office. A copy was given to the Coddenham National School and is now lost. The fourth copy had remained in the village & those who read it were intrigued by its content and felt strongly that this History of Coddenham was important and should not be forgotten. That it must be shared with everyone who was interested and that more research should be undertaken and records kept of important events, so ensuring an ongoing history of the village for the future.

Following on from the collaboration with other interested parties, in 1985 the Coddenham History Club was founded and its constitution set in November 1986.

Membership grew quickly and besides local people there were members from all over the UK and worldwide. Within a short time and because of some very enthusiastic people things started to happen, leading to: