Many notable personalities have lived or had connections with Coddenham Parish over the centuries. In this section of the website we plan to describe some of them. Starting with an article by our History Recorder John Pelling.

Born a decade apart, Candler (1605-1663) and Dowsing (1596-1688) came into contact in the late 1620s. Dowsing had married Thamar, daughter of Philip Lea. He owned Baldwyns, a tenement in Coddenham that had been worth £140 (p.a.) in the sixteenth century, according to Candler’s manuscripts, which date from 1655 onwards. The Lea family was prominent locally. It was not until 1643, after his wife’s death and his removal to Stratford St Mary. where he remarried, that Dowsing was commissioned ‘for the destruction of monuments of idolatry and superstition.’ He and Candler were to meet again in 1644. 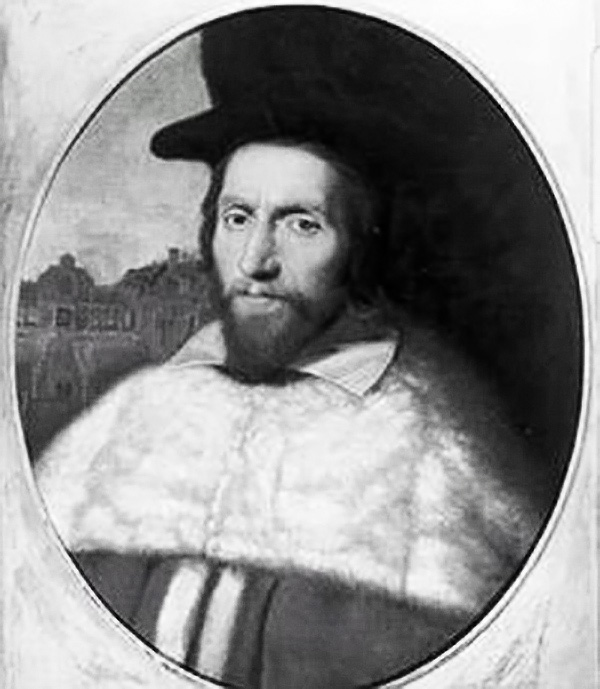 William and Thamar Dowsing lived at Baylham House from 1626 until about 1640. Although there was a church in the village, he
and his family attended St Mary’s, Coddenham. Six of their children were baptised there, four by Matthias Candler, who was vicar of Coddenham from 1629 until his death in 1663.

There is no knowing their degree of agreement on religion, although it seems the two men were supporters of Parliament during the Civil War. Both would have been opposed to the high church ceremonial introduced by Archbishop Laud; Candler was also a signatory to a petition for church government without bishops, which Dowsing would have supported. As a farmer’s son, Dowsing was probably only educated to the level a village schoolmaster could deliver, but he was well-read. Professor Morrill lists many books that he owned. Candler, a Cambridge graduate, may well have owned similar works, of the ‘godly’ or Puritan tendency.

Dowsing seems to have been present when his men took down three crosses from the ‘steeple’ (used for both tower and spire in those days) and the chancel at Coddenham. They left intact the inscription ‘Orate pro animae’ – pray for the souls of John and Margaret French whose bequest had funded construction of the clerestory, where it remains to this day. The chancel floor may also have been left in its slightly elevated position rather than  level with the nave, as in other churches. It cannot be known whether Candler or Nicholas Bacon of Shrubland, patron of the church, intervened to save these

A few of Candler’s opinions may be inferred from his writing about Suffolk churches and their parishes. These are contained in at least seven manuscripts he and (after his death) his son, Philip, compiled. They are among the most comprehensive gazetteers ever made of Suffolk. Details of each parish, its land holdings and values with their owners, the houses and church monuments including heraldry, are given. Occasional comments give us a clue to Candler’s opinions.

The parish notes are invaluable, because Candler’s sermons have not survived, so there is no other way of knowing his doctrinal beliefs. A much younger minister, John Fairfax of Barking, who claimed Candler’s friendship. Wrote that ‘he never was forward for conformity’. Fairfax was ejected from his parish in 1662, along with his brother Nathaniel at Willisham and their father at Rumburgh, but he was not bitter that Candler had not shared their fate. He wrote that Candler had ‘taught the good old savoury truths by which men get to heaven’ so that ‘great multitudes, far and near, flocked after his ministry.’ Candler, he stated, was ‘bold in his delivery but decent.’

Other preachers acquainted with Candler were John Ward of St Clement’s Ipswich, a parish close to St Mary Quay, where Philip Candler was to become minister, and Samuel Golty, about whom Candler wrote the following:

“At the time when the ingagement was pressed to be true and faithfull to the Commonwealth of England as then established without King or House of Lords & many able men were removed out of their places for not subscribing to it – some sectaries articled against Mr Goltie and he refusing the engagement tendred to him his living at Framlingham was sequestred from him and he afterwards came & preached at Ash Bocking.”

‘Sectaries’ would have been extreme Puritans for whom the engagement was essential. Its use here suggests Candler was less severe, although it should be noted that Philip Candler was married to Golty’s daughter Deborah, niece of John Ward. ‘Death is the real victory for the godly is the inscription on Ward’s memorial; and one of his sermons urges ‘long patience for the rain as well as for the sunshine.’ Incidentally, Theodore Beale, vicar of Ashbocking, had been ejected in 1644, six years before the engagement, for other reasons.

Candler’s manuscripts record penalties for support of Charles I or being a recusant (Roman Catholic). These were called compounding, in which to escape sequestration of an entire estate a percentage value was paid to the cause of Parliament. Candler did not notice, In transcribing the monument of a local recusant family, Cantrell of Hemingstone, the private chapel that one of them had built during Elizabeth’s reign, with a ‘squint’ into the church so he could claim to be attending while not participating. On the other hand he noted that ‘old men in Coddenham’ believed that ‘since a Gosnold and one Looson persecuted that martyr Thomas Spurdance (mentioned by Mr Foxe) their families did never thrive.’ Foxe’s book of martyrs, Acts and Monuments, was an account of all the Protestants who had resisted the reconversion to Catholicism under Mary Tudor. This would have been among Candler’s books, as it was in Dowsing’s library.

Spurdance was burned at the stake in Bury, where a monument to the martyrs was erected. He is also named on a noticeboard at the recreation field. He lived in Crowfield, where the church was a chapel of ease until recently, so counted as in Coddenham parish. One of the Gosnold family at Otley Hall had been involved in the Virginia colony with Sir Walter Ralegh. His History of the World was in Dowsing’s library and may also have been in Candler’s. Two of the Gosnold family, Candler recorded, had lived at the Griffon inn, now Crown House or Griffon House, ‘but whether they were owners of it or paid rent I cannot find.’

Candler wrote, probably with more sympathy than of Royalists, about people who gave or loaned money to the Parliamentary cause. Among these were Simon Dowsing of Laxfield, reputed birthplace of William. One Coddenham man, John Deynes, was a doctor as well as an officer in the Parliamentary army. He lived at what is probably Manor Farm, ‘over against the church gates’ on land sold to his father by Ralph Cantrell of Hemingstone, from his share of the Shrubland estate gained by marriage. Another man of Coddenham who served was ‘John Blowers [who] now is gone into the armie and hath left his wife and children to the towne,’ according to the parish minutes kept by Candler. A further entry notes a poor rate payment made to ‘Blower’s wife while he is still gallantly in service.’

Puritan he may have been, but not necessarily of the ‘fire and brimstone’ kind that, Fairfax wrote, would appeal to ‘men having itching ears, [as] teachers according to their humours.’ The term ‘itching ears’ was also John Bunyan’s, who may well be described as a fire and brimstone preacher. One possible reason Candler was not ejected from Coddenham in 1662 may be, as the late Dr Blatchly suggested, that he was absent.  His memorial on the wall of the chancel was ‘erected’ by Thomas and Anne Essington of Brightwell. Candler may have spent his last days at their home. His place could therefore have been filled by a curate, as he served Andrew Kinwellmarsh, vicar of Coddenham from 1576 to 1629, before his own induction. Candler’s daughter was baptised here in 1628, the year before he was instituted, and he is mentioned in two wills of that year, one of them in conjunction with Dowsing. He may have considered, near the end of his life, that his ministry was worth a bishop as Henry IV observed ‘France is worth a mass’ on making a far more considerable change. Candler gained little and was certainly no vicar of Bray. Nonetheless, there is no explanation of his presence in the parish to enter a baptism in April 1663.

One further comment is Candler’s own. He noted among the vicars since the Reformation ‘James Glover who could change with all times’ until the fifth year of Elizabeth: in other words he had been incumbent under Henry VIII, Edward VI and Mary, monarchs who had introduced variously dramatic swings in church observance. The description is cancelled in the manuscript, as is the reference to Candler’s marriage. Whether these were by Candler himself or his eldest son Philip, who signed the 1655 manuscript, cannot be known. Philip was probably responsible for squeezing in the achievement of arms for the family, which may have been retrospective but was not granted until 1664, after his father’s death.

One puzzle remains, perhaps easily solved. Philip applied for the grant of arms in 1664, after his father’s death. He signed as Gillet and explained the use of Candler was for reasons of inheritance. This may have related to land held at Yoxford for many years before Matthias was born there. Most of this land had been sold or, as Matthias had implied in notes on the parish, acquired by subterfuge. Little of it remained at his death, and that was sold by Philip, using the name of Gillet.

Philip’s inheritance included a provision to pay money to his siblings on account of that land. A fascinating aspect of Candler’s will is the value of his books. The image of an extract below shows they were worth nearly as much as the sum of most of the other provision

In primus a bedstead and bedding £6

Item Five trunks, one chest and one lock  £2

As mentioned above the titles of his books are not known but they would mainly have been religious and doctrinal. Candler maintained intellectual pursuits until the end of his life.

+ My thanks to Sylvia Bickers for help and information, including the History Club copy of The Journal of William Dowsing, from which Professor Morrill’s and Dr Blatchly’s references are taken, and a transcription of selections from the Parish Minutes.+

Any cookies that may not be particularly necessary for the website to function and is used specifically to collect user personal data via analytics, ads, other embedded contents are termed as non-necessary cookies. It is mandatory to procure user consent prior to running these cookies on your website.