I am the Good Shepherd – From the Rectory 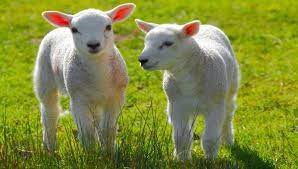 ‘It’s getting noisy round here’ I thought.  It was a gloriously warm and sunny afternoon.  When I arrived at the church, only the cheerful song of a blackbird had broken the silence.  Now, some 10 minutes later, I could hear a cacophony of bleating.  The field across the road is often home to livestock; cattle or sheep, they come and go.  Normally they graze quietly, with the occasional bleat in lambing season.  Today was noisy.  Clearly, something was ahoof.

Sure enough, the flock was on the move.  The traffic stopped, a gate opened, and a flock of sheep made their way smartly across the road and up the lane opposite.  Three men, a dog and a quad-bike; It was neatly done, or was it?  As the road fell silent, a sheepish head re-appeared from the lane, heading back the way it had just come.  A shepherd moved smartly, turning it back to re-join the flock.  Finally, as stillness returned, one last little lamb scampered out of the field; followed closely by the dog and his master.  Then and only then, the gate to the bottom field was closed, the field fell silent and the road was opened once more; no one had been left behind.

When Jesus said ‘I am the good shepherd’, his disciples would have pictured shepherds at work in Galilean hills, with the shepherd striding out in front of the flock.  There would have been no dog, and certainly no quad bike to help the shepherd.  Times change, technology changes, methods change, but the care of the shepherd remains.  The wanderer is turned round and brought home, no one is left behind, no matter how small.  I am the good shepherd, I know my own and my own know me, ……. I lay down my life for my sheep’ (Jn 10:14,15)