Passing Glory – From the Rectory 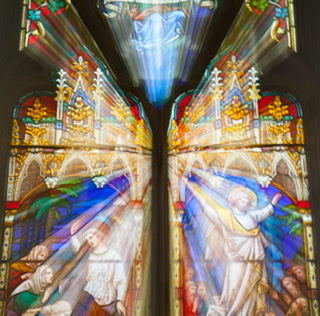 A few days ago, I visited Sutton Hoo.  Gazing down the slope toward the Deben, I couldn’t help but think of the men who had laboured to raise a 90ft long, oak hulled, sea-going ship from the river to its final resting place on the Hoo.  All that effort to equip a king for his journey into the afterlife.  For the king and his community, this was an important statement to be heard by all who passed up the river for years to come.  However, as time passed: the old ways were forgotten; the land reverted to farming; Saxon England was dismissed as ‘The Dark Ages’; the glory of Raedwald forgotten. ‘Sic transit gloria mundi[1].’

The desire to leave our mark in the world, long before we pass to the next, is almost universal.  From great cathedrals, to local charities; size and scope may change, but whatever our contribution in life (or death), we want to believe we are making a difference.  Like King Raedwald’s subjects, subconsciously at least, we expect our work to live on.  When a church or school closes, a charity winds up, our favoured project is no more; we may well ask, “was it worthwhile?”   Yet in asking that question, do we discount both the value of what we do for today, and the many unexpected ways our lives feed the future?

I wonder what the ghosts of those who laboured over that ship thought as the centuries passed; the site was abandoned and their labours slipped into obscurity.  Had they laboured in vain, lugging his ship up that hill?  We may never know if King Raedwald passed successfully to Valhalla.  We do see that in this world, at least, immortality had been denied, until now.  Their work blessed their community in their life-time.  Now, after many centuries rest, it is also helping to bring the age of Raedwald and his kingdom to life again.

As Jesus’ broken body was taken from the cross, his followers must have wondered if they had just wasted 3 years of their life.  Less than 72 hours later, they had their answer, could they but see it.  Understanding the resurrection would take time.  Over the intervening centuries Christian communities have come, gone and come again.  Our parish churches are testimonies in wood and stone to the changing times.  As God works his purposes out, we may never see the fruit we bear.  Yet through it all, the Word of God lives, and we are called to live with him.