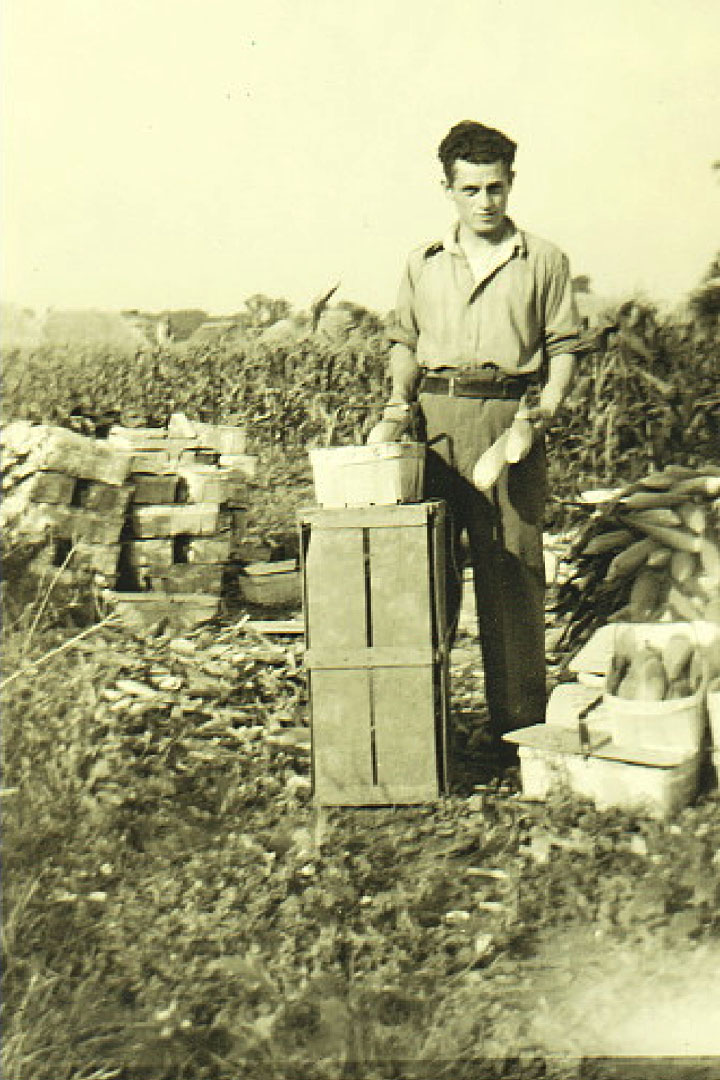 Toni Figliuolo, locally known as “Toni the Italian”, was an Italian prisoner of war who was captured in Libya in 1941. He was sent to Liverpool on a ship which was fitted with barbed wire to stop escape attempts. They were at sea for 75 days. He arrived in Liverpool penniless, having had his bag stolen with the loss of all his family photographs. He was first taken to Cambridgeshire to help build a camp for 500 prisoners, and after that was sent to Brick Kiln Farm in Hemingstone as a farm worker; having come from a farming background. The farm was owned by the McIntyre family. In an interview for The News of the World magazine in 1991, Toni says, “They treated us like family. We always ate our meals with them and were given a room in the house and although we weren’t allowed to go into town or to the cinema, I felt free. One of the McIntyre daughters, Dorothy, helped teach me to speak English. At the time Florence (the other daughter), lived away from home”.

“Because I was born and raised on a farm, I knew what to do. I’d get up at 6 every morning to milk the herd of 25 cows. It was fine in the summer, but it was awful in the winter frost! Of course, working on a farm was harder then without modern machinery. The ploughing was still done by horses.”

“It took me a while to settle into my surroundings and I felt lonely without my family. I often thought about the life back in Italy. I wrote telling them of my new life.”
When the war was over, Toni repatriated and reunited with his family in Italy. But not able to find regular work there and missing his English employers, he wrote to them asking for his old job back, to which they agreed. With what little savings Toni could scrape together, he bought a train ticket back to Britain.

Toni remembered the day he returned very clearly. “I arrived at the farm at 2 in the morning and rattled the window.” Now he was a free man and paid a wage and he made extra money by shooting rabbits and selling them.

“On the farm I did what I liked, the McIntyres trusted me so much that they gave me blank cheques to buy cattle and other materials They knew I never cheated them.”
After the deaths of her father and her sister Dorothy, Florence McIntyre inherited the farm in 1961. She relied on Toni and trusted him with the running of the farm and taking care of her daily welfare. Toni felt it was his duty to do this after her father and Dorothy had passed away and her brothers had been killed in the war.

When Florence died, she left Toni the 140acre farm and the farmhouse, her gratitude for the 45 years that Toni had devoted to both the farm and the family. “I was very upset when she died, it was like losing a member of my family. She’d been very kind to me and was always buying me things, like a new shirt.” The elderly spinster had treated Toni as the son she never had.

It was now that Toni married his long-term girlfriend Pam and she moved into Brick Kiln Farm with him. They had regularly gone out in the evenings for a drink to unwind and socialise with their friends locally. They both played darts in the Coddenham Duke team.

Toni’s wife Pam tells us that he didn’t go back to Italy for 21 years, as he didn’t like to leave Miss McIntyre. But they went together in 1991 and nearly every year after until 2003 when he was ill with cancer. In 1998 he was asked to go on Italian television to tell his story.

Toni was born in Picerno, Italy in 1919 and he died at the age of 85 on 16th March, 2004. His ashes are in Coddenham Cemetery next to the Mcintyre family.
The above was put together partly from an article in the “News of the World” Sunday magazine published 17th February, 1991 which was written by Marina Shamoon, and also the memories he related to his wife Pam during their years together.)

There were several more prisoners of war working in and about Coddenham. We have been told that four Italians came regularly to the Methodist Chapel from Bosmere and Dearbolt Hall in Earl Stonham.

This website uses cookies to improve your experience while you navigate through the website. Out of these cookies, the cookies that are categorized as necessary are stored on your browser as they are essential for the working of basic functionalities of the website. We also use third-party cookies that help us analyze and understand how you use this website. These cookies will be stored in your browser only with your consent. You also have the option to opt-out of these cookies. But opting out of some of these cookies may have an effect on your browsing experience.
Necessary Always Enabled
Necessary cookies are absolutely essential for the website to function properly. This category only includes cookies that ensures basic functionalities and security features of the website. These cookies do not store any personal information.
Non-necessary
Any cookies that may not be particularly necessary for the website to function and is used specifically to collect user personal data via analytics, ads, other embedded contents are termed as non-necessary cookies. It is mandatory to procure user consent prior to running these cookies on your website.
SAVE & ACCEPT
Share This